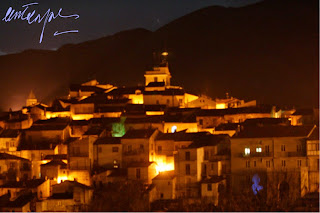 with the collaboration of:
Giuseppe Giacoia
Madely Schott
Pietro Rigolo

In 2005, the Associazione Culturale Vincenzo De Luca, following its interest in contemporary art, launched A Cielo Aperto (Wide Open Sky), in the town of Latronico (Potenza). This is a public art project curated by Bianco-Valente and Pasquale Campanella. The town now has a permanent collection of publicly installed artworks that can be seen any time throughout the year.

Centocapre (Onehundredgoats) is a participatory art project created by artist Francesco Bertelé as a form of historical reconstruction of a collective myth, i.e. the legendary character of Centocapre. The project takes as a starting point the obscurity surrounding the origin of the myth and archeological finds related to it. The project makes use of experiences and traditions collected from the people of Latronico (PZ). The mythological reconstruction takes place through workshops, interviews and collaborations between the team of artists and the locals. The population has the opportunity to rediscover in their memories, places and identity, the meaning of the myth itself.

The project started in December 2013, following the discovery of an historical artifact. Although some initial results from the research conducted were presented during last summer, a final exhibition will take place on the 28th December 2014. Video projections, costumes and archive and research material gathered during the past year will be shown. A theatre performance will follow in the ARCI Theatre Space. A masked parade, which will involve the audience, will conclude the evening. The public parade will march through the streets and end its journey at the highest point of the town of Latronico, it is here where there will be a final evocation of the ungraspable image of Centocapre. [...]